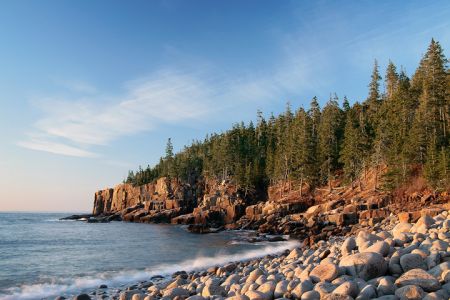 The State of Maine is in the extreme northeastern part of the United States at approximately the same latitude as the southern portion of France, just approximately 3000 plus miles west of it across the Atlantic Ocean.

Maine could easily be a significant location for someone wanting to experience all types of nature. With just over 30,800 sq mi / 797,716 sq km in area and a population of just over 1.3 million residents, it has a density of approximately 43 people per square mile/2.5 km. It's easy to see it's not a densely populated state. And a lot of the residents here are concentrated in larger cities and along it's 3,500 miles/5,632 km of iconic coastline. There remain 17,000,000 acres/6,879,655 hectares of forest and wide open, scarcely explored country with it's 6,000 lakes and ponds spread out over the state available to the visitor and resident.

Nature plays a large part in the everyday life in Maine. You only have to notice the people in this state whose livelihood is derived from the water in the form of lobster fishing, oysters, and other such fishing-related industry.

With it's seaside habitat and varied habitat in the interior, Maine is also a significant force in the world of birding. Consider the approximately 450 species that have been reported as sighted here, the large number of people reporting sightings, and the over 2000 hotspots recorded as being present throughout the state.

The adventuresome visitor to, as well as the residents of the state, have a wide variety of habitat to choose from in their pursuits ranging from the sea to the mountains with waterways, wooded areas, and hiking trails to name a few. In fact, Maine is the northern terminus of the famed Appalachian Trail.

Calling Maine a significant, or notable, location for birding would be no understatement.

Take into consideration the 467 species reported to Avibase as having been sighted here with 18 globally threatened species sighted. Over 160 species have been reported to them as rare/accidental for this state. [5]

Just under 17, 000 people, in combination with 2,073 Hotspots, have submitted 529,000 checklists to eBird detailing 448 species sighted in this state. Of those, when it comes to numbers, the Red-necked Phalarope, Common Eider, Bonaparte's Gull, American Crow, and Tree Swallow top the list. [4]

In addition to the wide variety of bird species in Maine, other forms of wildlife a visitor might see can include the moose, lobster, black bear, deer, raccoon, cougar, and coyote to name a few. [1]

Maine was the 23rd State admitted to the United States in 1820 being formed from part of Massachusetts. However, it's northern borders were not finally set until 1842.[1]

Maine itself is an area of interest. Here a visitor will find many things and places that will attract their attention. But to offer a few especially of interest to birders, consider these.

As quoted on their website, Maine is more forested than any other state, with a rugged coastline longer than California's. There are so many places for birds to hide. Where you go depends on what you know.

The Maine Birding Trail can help you know as much as possible so that you can enjoy your birding trip throughout all 4 sections, Coastal, Downeast, Western, and Northern, of the state. [6]

Another of the amenities that makes the state a great place for birding. [2]

A variety of stops along a trail exhibiting this area's birding potential. [2]

A Maine State Park with approximately 15 eBird Hotspots spread through the park. In addition, it's the home of the iconic Mount Katahdin, which is significant in it's own when it comes to nature. Katahdin is also the northern terminus of the famed Appalachian Trail, one of the premier long distance hiking trails in the United States. [2]

A United States National Park in the State of Maine that has been described as the 'Crown Jewel of the North Atlantic Coast' It offers the visitor the natural beauty, and birding potential, of the rocky headlands of the Atlantic coastline along it's 27 miles of drivable roads, 45 miles of carriage roads, and 158 miles of hiking trails. [7]

Bar Harbor is a coastal town that to many has the iconic appearance of what Maine is in it's looks, features, livelihoods, etc. [8]

Consult a trusted travel professional for specific, up-to-date travel information regarding travel to this area.

Search for photos of Maine in the gallery

Search for videos of Maine on BirdForum TV