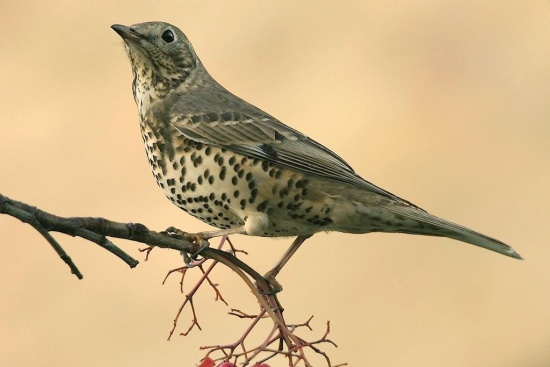 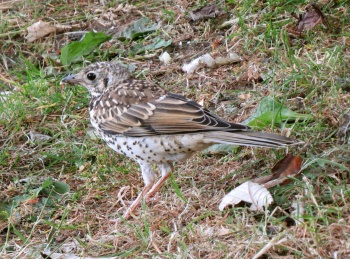 Song Thrush is distinctly smaller, has warmer brown upperparts, 'arrow-shaped' spots on the breast, and an orange-buff underwing. Fieldfare is closer in size and shares the white underwing, but has plain blue-grey head, red-brown wings, grey rump, and inverted-V-chevroned breast spots.

Juveniles with their scaly plumage are sometimes mistaken by inexperienced birders for the similar-sized White's Thrush, but are not so markedly scaly, and lack the bold black underwing stripe shown by White's. 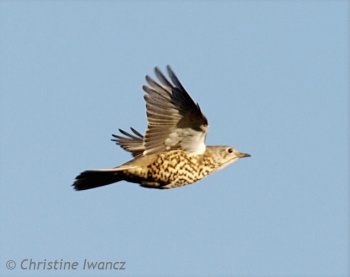 A common and widespread species in Europe, western Asia and northwest Africa.

Breeds in the British Isles, France and Iberia east across Europe to the Urals. Breeds in south-east Norway and in much of lowland Sweden and Finland and in Russia north to the White Sea. In the south breeds patchily in north Mediterranean countries and on Corsica, Sardinia and Sicily. Also breeds parts of Turkey and the Caucasus, in the Atlas Mountains of northwest Africa, and possibly regularly on Madeira.

Migratory in northern Scandinavia and from Poland eastwards, remainder of range varies from sedentary to partial migrant. Most migrants winter within range of more southerly breeders but becomes more widespread around the Mediterranean from September-April.

Vagrants recorded in Iceland and Faroes, on the Azores and in Egypt, Israel and Kuwait.

The type species of the genus Turdus and resembling several other thrushes; despite this, phylogenetically it is distinct, basal to the rest of the genus[1]. One consequence of this is that, if the genus Turdus were ever to be split into more than one genus, Mistle Thrush would be left as the sole member of Turdus, with every other species moved into new genera. 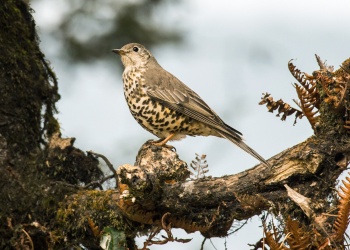 Open woods, parks and gardens. Light woodland and open country, often in human-altered habitats like parks, sports fields, and large gardens. After breeding commonly moves to areas with abundant supplies of berries, ivy, yew, holly and mistletoe are favoured. Also feeds in open grassland, playing fields and farmland. Unlike Song Thrush, often feeds in the open well away from cover.

Bold, and often aggressive; when breeding frequently mobs predators like cats and Magpies, often very successfully, with its harsh rattling call. Will sometimes even attack people who come too close to its nest. Can look 'tall' when standing.

The nest is a big, loose, cup of roots, leaves and moss. It is usually placed high in a tree. The clutch consists of 4 greenish-blue eggs with red marks which are incubated for 15-16 days. The young fledge about 2 weeks later. There may be two broods in the season which runs from late March to July.

Diet includes worms, fruit, seeds, invertebrates. In autumn and winter, they will vigorously defend individual trees with a heavy fruit crop, chasing away other fruit-eating birds like Waxwings and Redwings to preserve their food supply.

Song: bold, loud, not very varied. Usually given from a prominent treetop perch, including on very windy days (hence the old nickname "stormcock").
Voice: like a football rattle.

Search for photos of Mistle Thrush in the BirdForum Gallery

Search for videos of Mistle Thrush on BirdForum TV