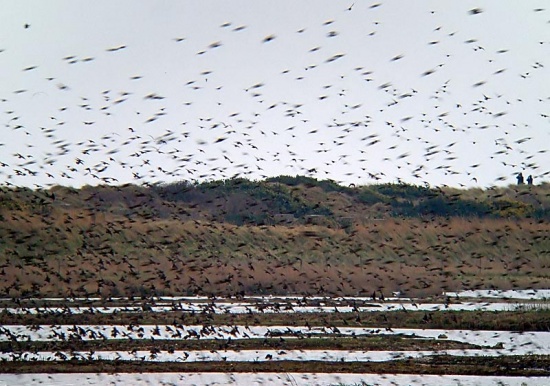 Photo by NoSpringChicken
Starlings at Minsmere

One of the RSPB's most famous reserves and one of the most heavily visited. It is also probably one of the most interesting in terms of the number of species that can be seen. The large number of breeding birds reflects the diversity of habitats that make up this 800 hectare reserve on the Suffolk coast.

As well as coastal habitats such as lagoons with islands, dunes, beaches and saltmarsh, there are freshwater wetlands with reedbeds and areas of deciduous woodland, heath and farmland. The various habitats are carefully managed to provide the optimum conditions for breeding and visiting birds and disturbance from the public is kept to a minimum.

Over 300 species of bird have been recorded on the reserve, 200 of these are recorded annually and about 100 breed, a reflection of the variety of habitats present. Great Bittern, Pied Avocet and breeding terns are the specialities of Minsmere but there is very much more to be seen. More than twenty species of wader can be seen in a day in late summer at Minsmere.

Garganey are often present in summer as well as Cetti's Warbler and other warblers in the wetland areas. Savi's Warbler was once regular here but has declined as elsewhere in Britain and is now very rare.

Other inhabitants of the reedbeds include Marsh Harrier and Bearded Tit. The woodlands have Tawny Owl, Eurasian Sparrowhawk and all three British woodpeckers and European Nightjar and Wood Lark breed on the heathland.

Birders are attracted to Minsmere to see rare visitors such as Purple Heron, Eurasian Spoonbill and Spotted Crake which turn up with regularity but major rarities also occur with some frequency.

In March 2002 an Alpine Accentor was present on the reserve and in March 2003 a Black Kite was recorded.

The reserve is open every day except 25 and 26 December and is well signposted from the village of Westleton in Suffolk.

Entrance to the reserve is by permit only but there is a public hide overlooking The Scrape, reached along the beach from the National Trust car park at Dunwich Cliffs.

The best birdwathing site in England that I know of. The variety of birds is better in the spring and early summer than the autumn.

GavinM's review I agree with Leicaman, it's a fabulous place and as a bonus there's always been something unexpected passing through when I've been there (spoonbills and arctic skua from my last two visits)

I WAS THERE AGAIN ON THE 04/02/06. THIS TIME SIGHTING TWO FIRSTS FOR MY LIST, "SHORELARK" AND "BITTERN" AND A VERY YOUNG MUNKJAK DEER. I JUST WISH I COULD GET THERE MORE OFTEN. Pros