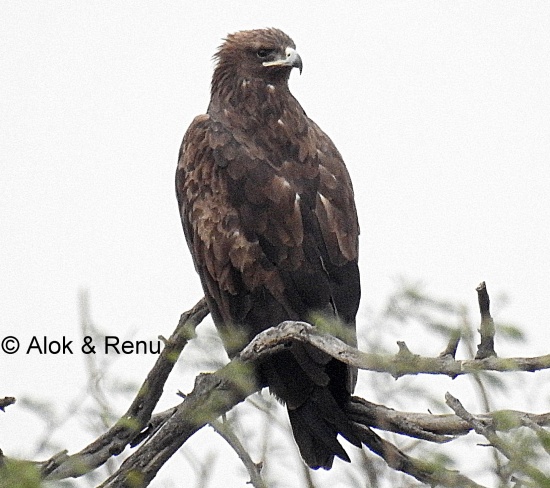 59–71 cm (23¼-28 in)
Overall a dark bird, except for the "fulvescens" variant (rare) that has body feathers and coverts pale buff but flight feathers and tail normal.
In flight look for a prominent hand with relatively long "finger", including 7th primary, and for underwing coverts darker than underside of flight feathers. On the upperside, there is a pale spot on the base of the primaries and on the base of the tail.
On the close up, look for rounded nostril 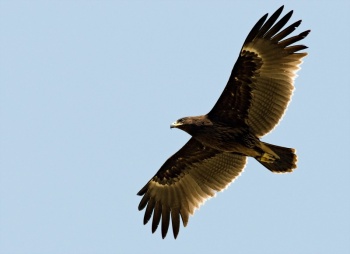 Photo © by tombac
Petcaburi, Thailand, Feb. 2010
Notice the barring on the secondaries which Lesser Spotted Eagle of similar age does not show
Click on image to view larger version

Eurasia and Africa. Breeds from northern European Russia south to Ukraine and east across Asia to the Pacific coast of the Russian Far East and eastern China. In Europe very rare outside Russia but small numbers breed in eastern Poland, northern Romania, Moldova and Belarus. Has bred in Sweden and Finland, Estonia and Lithuania, Hungary, Slovenia and Yugoslavia, Israel and Jordan.

Most western birds winter in sub-Saharan Africa but also in northern Greece and Turkey, the Middle East and Egypt. Also occurs in very small numbers in the Po Valley of Italy and southern France, especially the Camargue, in winter. "Tonn" the Estonian satellite-tagged bird has for the past nine years overwintered at El Hondo reserve in Alicante, Spain where in some years he has been accompanied by up to 5 other birds.

Undergoes a broad-front migration in September-October and does not concentrate at the major migration stations. Return movement in March-April. Regularly wanders to south-east Sweden, Denmark and sometimes the Netherlands in autumn and winter but not seen in Britain since the early 20th Century. 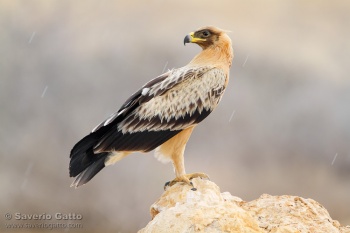 A vagrant to Norway, west to Iberia, the Balearic Islands and Morocco, also recorded as a vagrant in Sardinia. Also winters from Iran to Pakistan and throughout most of India and in South-East Asia south to southern Burma and Thailand. A vagrant to Malaya.

This is a monotypic species1.
Formerly included in the genus Aquila.

Breeds in large forests with lakes and swamps, open meadows or heath. Sometimes in more open areas but usually near water. 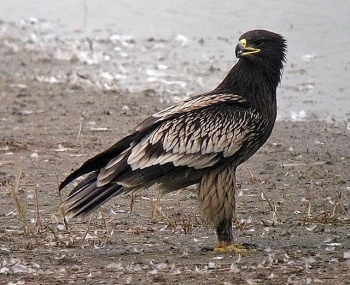 They eat a wide variety of small mammals.

Search for photos of Greater Spotted Eagle in the BirdForum Gallery

Search for videos of Greater Spotted Eagle on BirdForum TV