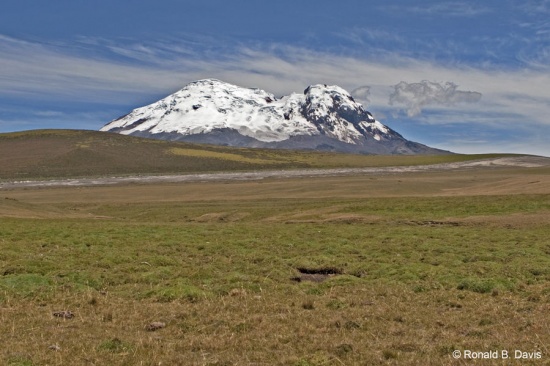 Straddling the equator from which it takes its name, Ecuador encompasses an area of 285,561 sq. km. (109,415 sq. mi.). UNESCO designated the capital, Quito, as a World Heritage Site in 1978, along with the Galapagos Islands. Sangay National Park was later designate as a WHS in 1981 and the city of Cuenca in 1999.

In spite of its small size, slightly smaller than the country of Italy, it boasts more species of birds than the United States and Europe combined and has over half of the known species of birds on the continent of South America. With over 1600 species registered, they have 22 avian orders with 82 families represented in the country. Ecuador has 42 endemic species and 77 species that are globally threatened.

In 2005 Ecuador became the first country in the Southern Hemisphere to recognize Important Bird Areas (IBAs) as sites of public interest. The first IBA was recognized in 1997, registering the “Mindo and Northwestern Pichincha Volcano” area. Since then, 106 more areas have been identified in the Galapagos, the coast, the Andean highlands and the Amazon basin.

Although Ecuador shares over 240 species of endemic birds with Colombia to the north and/or Peru to the south, there are 42 species that are endemic to mainland Ecuador and the Galapagos Islands. They are:

The following species are considered to be at risk in Ecuador:

The Oriente or Amazon Basin can be divided into two distinct regions; the High Amazon which comprises the foothills of the Andes and the Amazon Lowlands which are further east and provide the river drainage to the Amazon River. The more important of these rivers are the Napo, the Pastaza and the Putumayo. The Oriente is the least densely populated of the four main regions. Because of this the 7 Important Bird Areas cover a much larger territory. 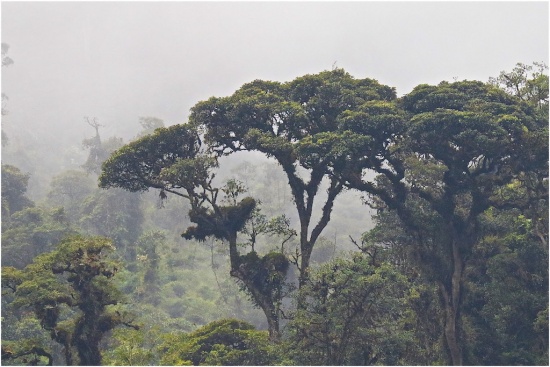 Cloud Forest on the eastern-slope of the Andes
Photo by Stanley Jones
Near Papallacta, Napo Province, Ecuador

The Sierra or Andes Mountain Range divides the mainland from north to south. This in turn is divided into two ranges; the Occidental or Western Range which descends to the coast and the Oriental or Eastern Range which gradually descends to the Amazon Basin. Between these two ranges is the Inter-Andean valley or plateau which can reach altitudes of 3000 meters (10,000 ft.).Throughout this region are numerous volcanoes reaching heights of 6,310 meters (20,800 feet). This is the most diverse area for birding with different species inhabiting various altitude ranges from 1000 meters (3,300 feet) in the coastal and Amazon basin regions to 4000 meters (13,200 feet) in the Andes. There are 59 designated Important Bird Areas throughout the Sierra.

The coast, or western lowlands, has about 640 km (400 mi.) of coastline as well as several islands. It is comprised of fertile plains, rolling hills and sedimentary basins. Numerous rivers crisscross the region providing habitat for various species of birds. There are 31 designated Important Bird Areas along the coast that accommodate many endemic species as well as several threatened birds. Isla de la Plata, about 30 km (20 mi) off the coast of Puerto Lopez is referred to as 'Little Galapagos' as it provides refuge for many of the more popular birds found on the archipelago such as the Magnificent Frigate bird, Waved Albatross and the Blue-footed Booby.

There are 28 endemic bird species on the islands and BirdLife International has designated 10 areas as Important Bird Areas.

Both Quito and Guayaquil are modern cities with all the amenities expected of such. Hotels range from budget to 5 star. Food also varies with many international restaurants featuring cuisine from numerous countries. However, one is cautioned to eat wisely when visiting some of the cheaper eateries to avoid unwanted side-affects.

When traveling away from the two major cities the accommodations are less formal, and less expensive. There are many hostels and hosterias that provide adequate rooms for a reasonable price. There are also several lodges which provide all the amenities one could want.

There are numerous travel agencies providing birding tours and packages. They can range from the very expensive to the more frugal. Most major areas have independent bird guides but choose wisely as many do not speak adequate English or may not be as well versed in the avifauna as they claim.

Search for photos of Ecuador in the gallery

Search for videos of Ecuador on BirdForum TV

The following 13 pages are in this category, out of 13 total.