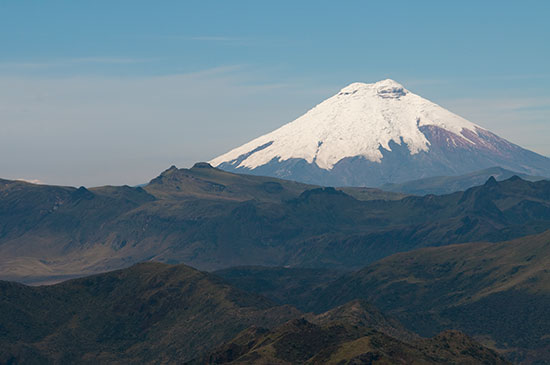 Cotopaxi National Park is about 30 km south of the city of Quito. It is named after the Cotopaxi, which is considered the highest active volcano in the world at 5,864 meters (19,350 ft.). This is the most visited park in Ecuador, but with 33,393 ha. (83,000 acres) of land there is plenty of room to find quiet areas to go birding.

Temperature average 7 degrees C (45 F). Cotopaxi is covered with clouds most of the year but the months of June – September can provide a good deal of sunshine. Deforestation has destroyed most of the native trees but pines and paramo grasses harbor a great variety of birds. Lake Limpiopungo provides a habitat for many species of waterfowl as well as the marsh grasses that are home to the Noble Snipe. A walk around the lake can reveal 10 to 15 different species birds.

Exploring the park one can encounter many species of raptors including the Carunculated Caracara, Black-chested Buzzard-Eagle, and Variable Hawk.

The park is named after the Cotopaxi, which is considered the highest active volcano in the world and is located in the middle of the park. The most famous eruption happened in June of 1877 and lasted several days. The lava melted the glaciers creating lahars, avalanches of mud, which were devasting and completely demolished the city of Latacunga, burying many of its residents alive.

There are two different entrances to Cotopaxi National Park. The northern entrance can be reached by turning left and going through the town of Machachi. The road is made of stone and is not well maintained in places. It travels through farmland and there are several species of birds that can be seen along the route.

The main entrance is on the western side of the mountain. This is easily accessible by traveling south on the PanAmerican Highway. After you pass the toll booth ($1 for cars) you will go up side of the mountain. When you travel down the other side look for the signs for Cotopaxi National Park on the left. You will cross a railroad track and then travel about 10km to the main entrance. The cost is $10 for foreigners and $2 for locals. Continue on this road into the park, about another 5km.

Once in the park you will see Lake Limpiopungo on the left. There is a large parking area and well maintained paths that circumvent the lake. Many species of birds can be encountered at this point. From here you can continue further into the park on gravel roads. In some areas the roads are well maintained but others can be a little rough.

There are several Inca ruins in the park. (You will receive a map when you enter the park that indicates the locations of these ruins.) There are also wild horses roaming the area. Camping is permitted in the park and it is possible to go horseback riding, bicycling, hiking, and mountain climbing.

There is a Hosteria (Tambopaxi Hotel) located within the park that offers rooms and a restaurant. There are also public bathrooms available for anyone passing through.

The main dry season is from June to September, but strong winds can occur. December also has a short dry season and the time around Christmas is normally considered the best weather of the year. The rainy seasons are from January to May and during October and November.