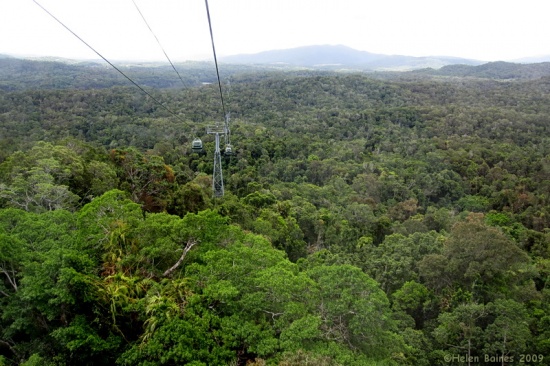 Photo by HelenB
A section of the rainforest, seen from the Skyrail Rainforest Cableway, on the Atherton Tablelands, west of Cairns, October 2009

Immediately to the west of Cairns, the land rises rapidly into a range of mountains and a large plateau known as the Atherton Tablelands. This is an area of very high biodiversity and contains a number of species of birds and other wildlife, much of which is not found on the coast in or around Cairns. Sadly, most of the rainforest that once clothed this plateau is now completely gone; converted into open farmland. However, much of what remains is protected and still harbours many interesting species. All of the Wet Tropics' endemic bird species are found here for example.

Much of the Tablelands consists of rolling farmland, both pasture and cultivated, dotted with small towns and numerous isolated patches of forest. There are also much larger areas of forest on the surrounding ranges. Most of the tablelands receive high rainfall, but there is an area of drier country stretching from Mareeba in the south to Mount Molly in the north. A whole different range of species can be found in this drier area.

A large number of bird species can be seen on the Tablelands including twelve found nowhere else. More than 370 species occur in the region.

The Atherton Tablelands are rich in wildlife. This includes many endemics and local specialities.

A number of good birding sites exist on the Tablelands. Due to the relatively close proximity of many of them to one another, it should be possible for several sites to be visited in a day. Birders should however plan for at least a week, preferably two, to make the most of the region as a whole. These include on the Northern Tablelands: the Black Mountain Road, Emerald Creek, Mareeba Wetlands, Lake Mitchell, Mount Molloy, Kingfisher Park and Mount Lewis; and on the Southern Tablelands: Crater Lakes National Park, Yungaburra, Hasties Swamp, Mount Hypipamee National Park and Springvale Road.

The Tablelands can be accessed by road directly from Cairns. Three switchback roads that wind their way up into the hills at various points along the coast give access to different parts of the Tablelands. Several buses a day run between Cairns and the town of Kuranda, with less frequent services running to Mareeba and the town of Atherton. Various wildlife and birding tours are also available to the Tablelands.

There are numerous small settlements on the Tablelands that have cafes and restaurants as well as the usual supermarkets and newsagents. There is also a fairly well-developed tourist infrastructure for sightseers looking for souvenirs. A number of national parks and smaller reserves have facilities ranging from restaurants, cafes and accommodation in some places, to nothing at all in others. Some sites allow camping, others do not.

Many birders choose to base themselves on the Tablelands and bird the surrounding area. Popular with birders are Cassowary House (on the Black Mountain Road near Kuranda), Kingfisher Park near Julatten and Chambers Wildlife Lodge near Lake Eacham (in the Crater Lakes National Park); but numerous other locations offer accommodation as well.

Search for photos of Atherton Tablelands in the gallery