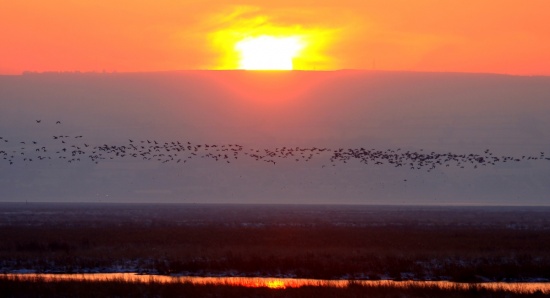 This reserve covers a large part of the eastern side of the Dee Estuary and consists of extensive areas of saltmarsh with numerous creeks, below which are large areas of inter-tidal mudflats. In addition there is a reedbed by the shore at Neston.

Although there are breeding Common Shelduck, Oystercatcher and Common Redshank and the reedbed at Neston has breeding warblers, the importance of this reserve lies in the large numbers of wintering and passage waterfowl and waders.

A large colony of Black-headed Gull occur here throughout the spring/summer and often contain the odd Mediterranean Gull.

The reedbed at Neston Neston Reedbed is the largest area of reeds on the estuary and is home to the largest population of Reed Warbler anywhere on the estuary. Cetti's Warbler are also possible in this area and the past few winters have seen several records.

A great variety of small mammals can be seen when high tides flood the marshes.

There are good viewpoints from a footpath adjacent to the Boathouse Restaurant and from the 'Old Baths' car park which is reached by driving along the lane in front of the Boathouse.

Gayton Sands can be viewed from Parkgate, reached on the B5135 road from the A540 Chester-Hoylake road.

Search for photos of Parkgate in the gallery

Search for photos of Parkgate in the gallery