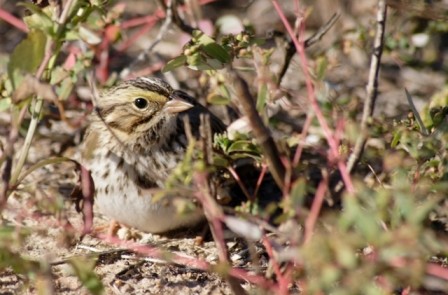 Tallahassee, Florida. This is an excellent inland site for shorebirds and ducks amongst other species.

In the staff carpark there is a Purple Martin tower. The birds usually return late January/early February but are gone by mid fall. Walk east along the asphalt road between the silos and eventually you will come to the first of several lagoons, which incidentally, are viewable from Capital Circle. Approach carefully as the birds are easily spooked especially in the winter when there are a lot of ducks. In Spring and Fall the shorebirds dont scare as easily but a cautious approach is recommended and great views within 50 feet can be had.

The water level of the lagoons is critical as to what birds are present. From April thru October low water levels will attract large numbers of shorebirds, mostly Least Sandpiper, Lesser Yellowlegs and Greater Yellowlegs, Killdeer, Dunlin, Stilt Sandpiper and Pectoral Sandpiper. Semipalmated Sandpiper and Western Sandpiper can occur in small numbers and both species of dowitcher are usally present, especially Long-billed Dowitcher with some remaining to late fall.

Local birders also concentrate on searching through the large wildfowl numbers which are present from late October thru March.

The bulk of the numbers are made up by Lesser Scaup, Blue-winged Teal, Northern Shoveler, Mallard, Green-winged Teal and Bufflehead with smaller numbers of Northern Pintail, Gadwall, Redhead, Ring-necked Duck, Ruddy Duck, Hooded Merganser and the resident Canada Goose which are very aggressive when nesting! You have been warned! American Wigeon, Canvasback and Common Goldeneye can be seen in ones or twos from time to time as well; the latter is not recorded annually though.

Other waterbirds on the lagoons are Pied-billed Grebe and American Coot, the latter increasing in numbers during the last few years. Eared Grebes have also been recorded but not every year and a rare Red-throated Loon paid a visit one winter.

In some winters and during migration (especially in fall after a hurricane has passed nearby) there are good numbers of gulls and occassionally terns present, mainly Ring-billed Gull but Laughing Gull does show up now and again along with Bonaparte's Gull and American Herring Gull. Franklin's Gull has been recorded but is very rare. Forster's Tern is fairly regular and Black Tern and Black Skimmer have been recorded after a hurricane has passed by.

The Springhill compund is huge and the keen birder should explore it all. The grasslands are good during migration and winter and should be checked carefully. 16 species of sparrow have been recorded including Clay-colored Sparrow, Lark Sparrow, Grasshopper Sparrow (annual), Le Conte's Sparrow, Nelson's Sparrow and Lincoln's Sparrow. Savannah Sparrow is the most common and Vesper Sparrow can be found in good numbers but not every year. Other species found around the spray fields include Bobolink, Dickcissel and Eastern Meadowlark. Eastern Phoebe and Eastern Bluebird can be seen perched on spray heads as well as Loggerhead Shrike, American Kestrel and Belted Kingfisher.

The ponds naturally attract a lot of bugs and the swallows and martins feast on them during the warmer months. Tree Swallow can be seen all year round and Northern Rough-winged Swallow sometimes lingers during the winter. Bank Swallow, Barn Swallow and Cliff Swallow occur and Cave Swallow has been recorded.

Although not as renowned as the nearby Tram Road plant for raptors Springhill still attracts a few species. Red-tailed Hawk and Red-shouldered Hawk are often seen along with Osprey. Both Swallow-tailed Kite and Mississippi Kite can be seen in the summer (Tram Road is better) and Bald Eagle occassionally show up.

Springhill is a great place to spend a couple of hours birding even it is smelly at times!

The plant is located on the southern edge of Tallahassee just east of Tallahassee airport. It can be found easily by travelling on Cap Circle towards the airport. The plant is south of Capital Circle at the junction of Springhill Road. There is a small carpark in front of the main buidling. Visitors should use the intercom by the entrance to gain access. Make sure you sign in and check the birding log for the latest sightings. The site is birded regularly by locals.

Once you have signed in proceed along the corridor and exit the back entrance. Check the bird list on the wall by the back door.