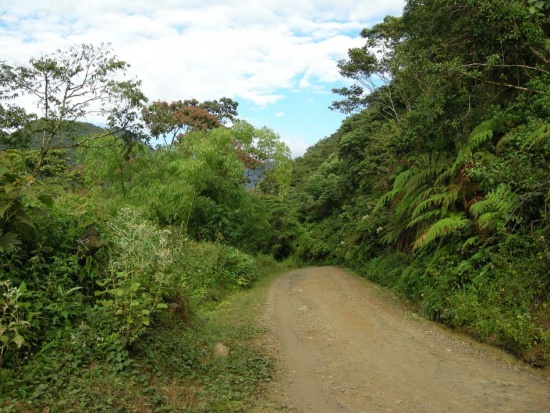 The famous Manu Road goes from Paucartambo up to the Acjanaco Pass (3550m) and from there in countless bends down the Kosnipata valley to the Amazonian lowland. It passes from the high Andean grassland through pristine Cloud Forest, hill forest and some agricultural areas to the Alto Madre de Dios river at Atalaya. The road ends there and transport down to Boca Manu and further downriver is only possible by boat.

It is worth to spend several days in the area and to spend some time at each altitudinal zone. Most birders visit the area with organised trips, however it is possible to travel here indepently. 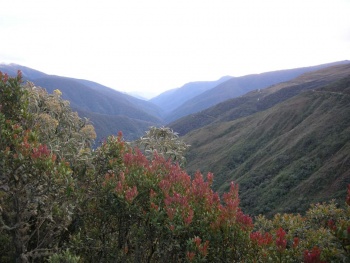 Photo by Wintibird
View from Wayquecha Station down to Kosnipata valley

Hundreds of species can be found along the Manu road, Hummingbirds, Tanagers, Flycatchers, Cotingas, Quetzals and much, much more.
Andean Cock-of-the-rock is usually on the wish-list and is easy to see. Military Macaw can be seen as well and Montane Solitary Eagle should be seen during a stay of several days. 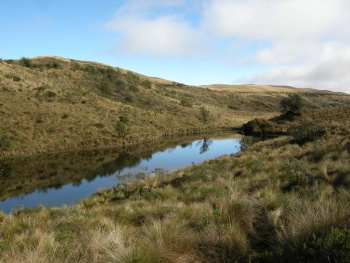 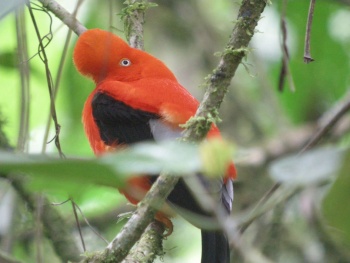 Tufted Capuchin Monkey and Gray Wooly Monkey roam around in the trees. South American Coati can be seen on the road. At the feeder at Cock-of-the-rock Lodge Tayra is regularly seen and Brown Agouti come to feed too. Montane Guinea Pig live around the pass and Bolivian Squirrel lower down in the forest.

The unpaved road links the Andean highland with the Amazonian lowland. There is not very much traffic, so birding along the road is mostly easy.
Landslides regularly cut the road and in most areas it is highly advisable to stay on the road and not to try to walk off the road. The slopes are very steep.

It is worth to spend some time in each altitudinal zone.

Busses from Cusco and Paucartambo run regularly to Pillcopata, sometimes further to Atalaya or even Ithahuania. It is also possible to hitchhike along the road.
There are basic hotels in Paucartambo and Pillcopata and several lodges along the road (Manu Cloud Forest Lodge, Paradise Lodge, Cock-of-the-rock Lodge and some small lodges before Pillcopata). It might also be possible to spend the night at Wayqecha Cloud Forest Biological Station. As many lodges are often full with groups it is best to reserve an accomodation. Many lodges also organize transport from Cusco to the lodge.