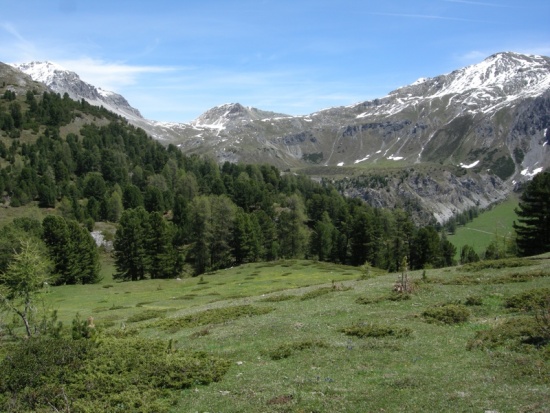 Established in 1914, this national park is one of the most scenically beautiful in Europe as well as being one of the best studied and well-managed.

In contrast to much of the country this area has been relatively undisturbed and today is very well protected and these factors have led to it being chosen as a site for a Lammergeier reintroduction programme.

Situated in the Engadine in eastern Switzerland, the park borders Italy's Stelvio NP and covers almost 170km2. Reaching 3,165m at Piz Quattervals this is a high mountain area with deep valleys and hillsides densely forested with pine, larch and spruce large areas of scrubby mountain pine at higher levels. Above the treeline there are very extensive alpine meadows.

Birds of the park include typical European mountain species but no major rarities except the reintroduced Lammergeier. Golden Eagle, Alpine Chough and Northern Raven are found at the highest levels as well as Rock Ptarmigan, Rock Partridge, Alpine Accentor and Wallcreeper.

Water Pipit is abundant in the meadows and Eurasian Dotterel sometimes occurs on passage.

Lower down, in the forest zone there are Eurasian Eagle Owl and other owls, Hazel Grouse and Western Capercaillie, Spotted Nutcracker and woodpeckers including Black Woodpecker and Three-toed Woodpecker. Goldcrest, Common Crossbill and Citril Finch are common.

Mammals surviving in the park include Red Deer Cervus elaphus and Roe Deer Capreolus capreolus, Chamois Rupicapra rupicapra and the reintroduced Ibex Capra ibex with the most obvious mammal, as elsewhere in the Alps, being the Alpine Marmot Marmota marmota. Larger carnivores such as Wolf and Bear, Lynx and Wildcat were exterminated long ago.

The area has much of botanical interest especially in the flower-rich alpine meadows and above but also in the Engadine Valley in the north of the park. This is the only Swiss valley to drain into the Danube so allowing the spread of eastern plants into the area and this is the most westerly point in the range of several species. Examples are Melica transvestita and Sisymbrium strictissimum.

Access to the park is unrestricted but visitors are asked to keep to marked paths, most of the park is inaccessible in winter. There are hiking trails detailed in the National Park Guide and those covering the forest, open meadows and rocky peaks can be excellent for birds.

To reach the area by road cross the Fluela or the Julier Pass, or else take the trtain to Zernez and then the postbus to the Ofen Pass.