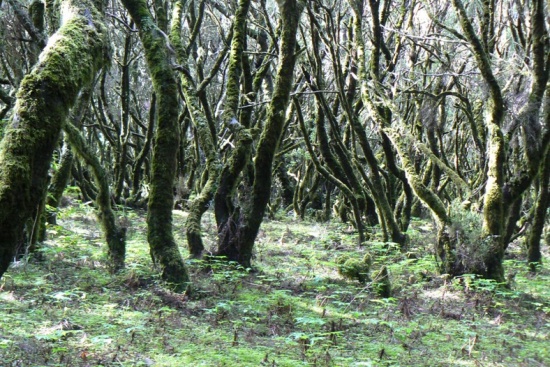 Quieter and much less visited than Tenerife, La Gomera is a small island of 380km2, almost circular with a central volcanic cone rising to 1,484m. This central cone, Mt Garajonay, provides the main ornithological interest on Gomera. Part of it remains covered in Laurisilva Forest and is protected as the Garajonay National Park which covers about 10% of the island.

The park includes the highest point and a plateau and 800-1400m as well as the rich forest consisting of Laurus azorica, Ilex canariensis, Myrica faya, Arbutus canariensis and Salix canariensis among others. This forest is especially rich at Monte El Cedro at the head of the El Cedro Valley. With more available water than elsewhere in the Canary Islands, the forests of La Gomera are rich in ferns and the streambanks and treetrunks are covered with a dense growth of lichens and mosses.

Seabirds around Gomera include all those seen from Tenerife and the ferry-trip between the two islands can be the most productive boatride in the archipelago. Bulwer's Petrel is regularly seen from May to September, Macaronesian Shearwater is present in small numbers in summer and Madeiran Storm-petrel is possible in May and August.

The El Cedro Valley is probably the best area for birds on the island and reached by road from the port at San Sebastian by heading for Hermigua via the Carretera del Norte. After emerging from a long tunnel follow the road until a bar/restaurant on the right is reached.

Both pigeons can be seen from the patio here or continue taking the next road on the left which leads onto the wooded slopes. About 5km further on is a track to the right signposted Monte El Cedro. This leads through excellent forest to the El Cedro picnic area, an ideal spot from which to explore the area.

These forests have both Canarian Pigeon as well as African Blue Tit, Chiffchaff, Canary Islands Kinglet, Chaffinch and Canary. Sparrowhawk also breeds here and the area is probably the best for Woodcock in the Canaries.

The cliffs on the north-east of Gomera at Costa de Majona have breeding species including Cory's Shearwater, Common Tern and Osprey.

In the south-west there are important cliffs between Punta de la Calera and Playa de Santiago. Also have Osprey, as well as European Storm-petrel and Macaronesian Shearwater.

Other rarities recorded on and around Gomera include Ring-necked Duck, White-rumped Sandpiper, Laughing Gull and Gull-billed Tern. 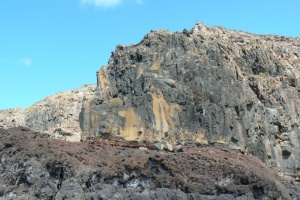 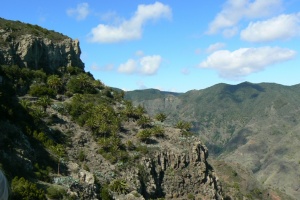 Photo by AlanR
Semi-arid habitat typical of land below the rain-affected peak.

Dolphins are usually seen from the Tenerife-Gomera ferry.

Endemic plants of Gomera include the blue Echium acanthocarpum, the legume Lotus emeroides and the yellow-flowered crucifer Crambe gomeraea.

La Gomera is reached by a 1.5 hour ferry trip from Los Christianos on Tenerife which docks at San Sebastian on the eastern side of the island. There are three trips per day and two returns from Gomera.

San Sebastian has an information centre where park visits can be arranged, there is hotel accommodation and camping within the park or just outside at El Cedro. Most visitors, however, make the day trip from Tenerife. There is an alternative ferry for those with time to spare which leaves Santa Cruz de Tenerife and arrives at San Sebastian 23 hours later after stopping at La Palma and El Hierro.

Search for photos of La Gomera in the gallery