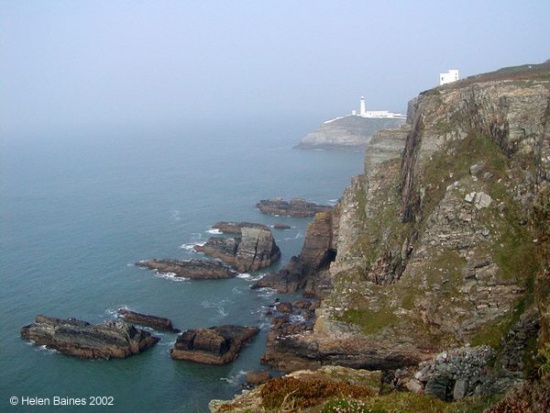 Photo by HelenB
South Stack Cliffs RSPB Reserve, with Ellin's Tower visible on the the top of the cliff, Anglesey, Wales

With some of the most dramatic scenery in North Wales and containing important seabird colonies, this reserve is deservedly one of the most popular in Wales.

Situated on the west of Holy Island, the westernmost headland of Anglesey, the habitat of this reserve consists of the high cliffs of South Stack and the lower cliffs of Penrhyn Mawr to the south. The cliffs are extensively eroded and there are many caves, stacks and gullies.

Atop the cliffs is maritime heath with patches of scrub and in the north, the heather moorland on the slopes of Holyhead Mountain.

Breeding seabirds of these cliffs include Common Guillemot, Razorbill and Atlantic Puffin, as well as Northern Fulmar, Shag, Kittiwake and other gulls. 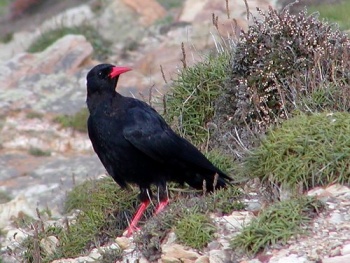 Another major attraction of the reserve is Red-billed Chough which breeds in small numbers on the cliffs in addition to Peregrine Falcon.

The heath and moor have Stonechat and Common Whitethroat and the wetter parts of Penrhosfeilw Common, behind Penrhyn Mawr is a breeding site for Northern Lapwing and Common Redshank.

This headland can produce good seawatching with regular Northern Gannet and skuas, large numbers of auks and Manx Shearwater. Sooty Shearwater is regular in autumn but Cory's Shearwater and Macaronesian Shearwater have also been recorded. This is also one of the best sites in Wales for Sabine's Gull.

A variety of passerine migrants can be seen here and rarities such as Greater Short-toed Lark, Rufous-tailed Rock Thrush and Ortolan Bunting have been recorded.

In Oct 2001 a Gray Catbird was recorded here, the first British record and present at the same time was a Red-eyed Vireo.

The area is also important botanically with two major rarities, Spotted Rock-rose Tuberaria guttata, confined to a few sites in Wales and Ireland and a maritime variety of Field Fleawort Senecio integrifolius which occurs only here.

Other scarce species include Pale Heath Violet Viola lactea and Devil's Bit Scabious succisa pratensis. The clifftop and heath are a colourful sight in spring with the bright yellow of Western Gorse Ulex gallii, pink Thrift Armeria maritima and the purple of three species of heather which dominate the heathland.

Silver-studded Blue is one of the commonest butterflies here and Small Pearl-bordered Fritillary, Gatekeeper and Grayling also occur.

Adder Vipera berus are common on the heathlands and Common Lizard Lacerta vivipara is also present.

Search for videos of South Stack Cliffs on BirdForum TV

Content and images originally posted by Steve and HelenB