The Farallon Islands, part of the US National Wildlife Refuge system, are comprised of 4 groups of small, rugged islands located approximately 30 miles off the coast of the State of California.

Southeast Farallon is the only island with structures. These are leftover from an earlier time and are used for residential purposes by scientific and maintenance people when working on the island.[2]

These islands have been said to be the location of the largest colony of nesting seabirds south of Alaska with approximately ¼ of the California breeding population taking place here.

The Farrallon Islands have had 442 species reported as having been seen here with 24 globally threatened species. [1] 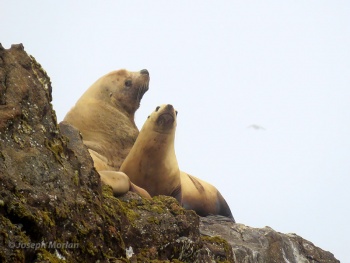 In addition to the bird species here, there is the possibility of seeing Steller's Sea Lion, California sea lions, harbor and northern elephant seals as well as sharks, bats and salamanders.[2]

Access onto the islands, by the general public, is not allowed. This stance is due to various reasons that can include protection of the wildlife and birds, lack of docking facilities on most of the islands, and lack of facilities for visitors.

Access is restricted, by and large, to scientific efforts and maintenance needs. However, interested parties can apply to volunteer their time to assist in certain maintenance type jobs.

Marine access to the waters around the islands is possible, but is restricted and controlled.[2]

Since these islands are off the California coast, west of San Francisco, the closest commercial airport supporting scheduled air service will be San Francisco International Airport (SFO).

Search for photos of Farallon Islands in the gallery