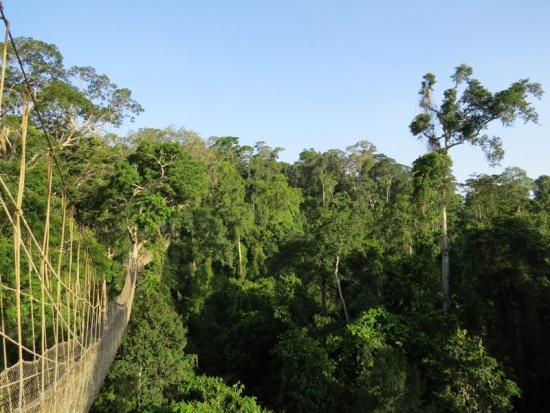 Kakum National Park is located in southern Ghana and covers an area of 375 square kilometers o tropical evergreen forest. After beeing established as a reserve in 1931 it was declared a national park in 1992. It's easy to reach from Accra and Cape Coast. A canopy walkway offers good views of the middle and upper canopy.
More than 300 species have been recorded in or around the park. 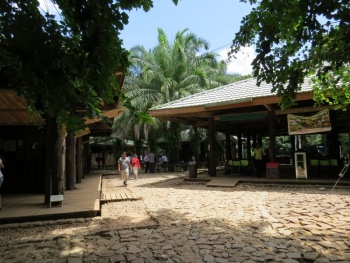 Many upper Guinean endemics can be seen in the park and nine species of hornbill occur. White-breasted Guineafowl occurs but is very difficult to see. Kakum is probably the easiest place in Ghana to see (or at least hear) Congo Serpent Eagle.

Several species of primates, squirrels and forest antilopes occur but are difficult to see. There is also a healthy population of African Forest Elephant but they tend to stay in the remote parts of the park. 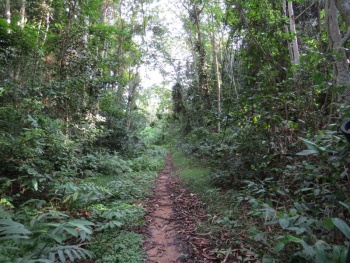 If you are travelling individually check with the park administration the need of permits for the various parts of the park. Birding in the farmbush around the park is allowed.

The area was declared a reserve in 1931. Logging however continued until 1989 and most of the park now consists of partially logged forest or secondary forest. In one part of the forest, the Assin Attandanso Forest Reserve, logging is still allowed for the local communities. Illegal poaching still goes on. Kakum National Park is a major tourist attraction today. The canopy walkway is also popular and a visit should be avoided at weekends.

An excellent place to see Congo Serpent Eagle and Hornbills. Well signed from the Cape Coast - Twifo Praso road. Coming from Cape Coast turn right (5°21'00.00''N/1°23'04.73''W) to the information centre. There you can book a tour on the canopy walkway. It's worth to spend the morning or the evening on the walkway. Brown Nightjar can be seen in the evening. Akun Eagle Owl was seen at the information centre in 2014.

Outside the park but still in reach with a car. At the bridge over the Pra-River Rock Pratincole, White-headed Lapwing and White-throated Blue Swallow can be seen.

Another track of forest, excellent for Hornbills and Cuckooshrikes. Reached via a rough track from the mainroad. Turn left at the main road at an abandonend hotel site (approximately 5°19'35.29''N/1°22'43.25''W). The farmbush from the mainroad towards the forest is also worth a morning. Listen for Sooty Boubou here.

This track gives access to the northern part of the Kakum National Park. Drive to Twifo Praso and turn right on the road to Foso. After the village of Aworoso turn right (approximately 5°37'49.44''N/1°23'50.56''W). The road goes south and finally enters the forest. African Piculet can be found here.

Access to the park is mainly from the Cape Coast - Twifo Praso road. It's possible to reach the park by public transport, however a taxi is more convenient.
Accomodation is mainly found between Cape Coast and the park. There are simple and cheap places to stay or more luxurious lodges. None of them is in the park itself, most are around 30 minutes by car from the canopy walkway.