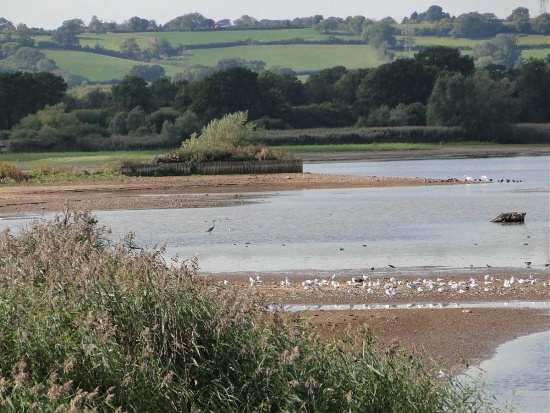 Despite the pressures from recreational activities, and sailing in particular, Chew Valley Lake remains excellent for birds and one of the most important sites for waterfowl in south-west England. It is an artificial reservoir covering nearly 500ha and was constructed in the 1950s.

Much of the surrounding area is rough grassland with occasional conifer plantations although there are some reedbeds on parts of the shore.

Further afield is mainly farmland with patches of deciduous woodland. More than 250 bird species have been recorded here.

Most birding interest at Chew Valley Lake lies in winter and during passage periods but breeding birds include Great Crested Grebe and Little Grebe, Gadwall and Tufted Duck. Mute Swan, Common Shelduck, Northern Shoveler, Common Pochard and Ruddy Duck also breed in small numbers, there is a small heronry, a rookery and Reed Warbler nests around the lakeshores.

Terns on passage include Common Tern and Arctic Tern with Black Tern regular in autumn. Little Gull is regular and raptors such as Marsh Harrier, Osprey and Northern Hobby pass through briefly.

In autumn and winter Mallard, Northern Shoveler, Common Teal and Eurasian Wigeon occur in flocks of many hundreds, sometimes thousands at Chew Valley Lake. These are joined by smaller numbers of Gadwall, Common Pochard, Tufted Duck and Common Goldeneye. Also regular are Northern Pintail, Smew, Goosander and the introduced Ruddy Duck has one of its major strongholds here with numbers reaching more than a thousand at times. Bewick's Swan is a regular visitor in small numbers in autumn.

More than 30,000 gulls gather here in winter and a search through the flocks of commoner species usually produces Mediterranean Gull and Yellow-legged Gull, possibly also Ring-billed Gull which is recorded annually. Other winter visitors to the area include occasional divers (usually Great Northern Diver), grebes and Great Bittern is present in the reeds most years. Water Pipit occurs here in good numbers in winter.

Vagrants occur with some regularity with records for Purple Heron and Savi's Warbler in spring and Black-crowned Night Heron and Cetti's Warbler in autumn. Ring-necked Duck and Ferruginous Duck have been recorded and Nearctic waders are sometimes present and have included Killdeer, Pectoral Sandpiper, White-rumped Sandpiper and Buff-breasted Sandpiper, Long-billed Dowitcher and Wilson's Phalarope.

There is also a chance of waders from the east and Greater Sand Plover, Temminck's Stint and Marsh Sandpiper have been recorded.

The Chew Valley Ringing Station is situated here at the southern end of the bridge. Just over 1km to the north in the direction of Bishop Sutton is a minor road on the left leading to a car park and permit holders can park here and walk to a hide through the trees.

On the western side of the lake there are more hides reached by taking the minor road on the right at the Blue Bowl Inn and continuing down the hill to the car park. There is a log book in a hide along a boardwalk and another hide to the north in a conifer plantation.

Chew Valley Lake lies about 13km south of Bristol and can be reached from the B3130 which links the A38 and A37, both roads heading south from Bristol. From the B3130 take the B3114 southwards at Chew Magna and this road follows the western side of the lake.