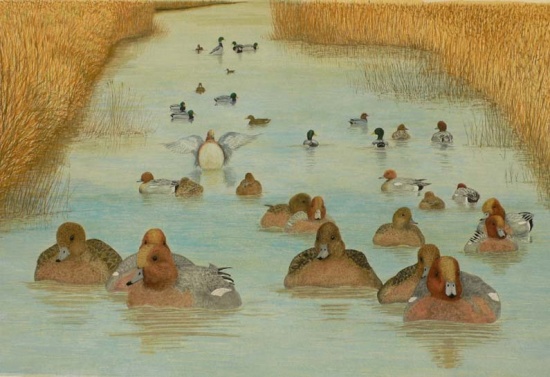 Among birders this is one of the most famous sites in Britain and remains very popular, indeed it can at times, be too crowded with birders for some visitors. However, the large number of watchers means very few interesting birds are missed and the entire area has a well-deserved reputation for producing rarities. More than 320 species have been recorded here.

The habitats include shingle beach and freshwater marshes, various lagoons, reed-fringed pools and wader scrapes. Hides overlook many of the best areas.

Although perhaps best known for rarities and waders in particular, the Cley/Salthouse area also has a good range of regular summer visitors including Pied Avocet, Black-tailed Godwit and Ruff.

The reedbeds provide nesting sites for Marsh Harrier and Bearded Tit, and warblers include Reed Warbler, Sedge Warbler and Cetti's Warbler. Savi's Warbler was once a regular summer visitor here but has now declined following the national trend. Great Bittern is often present and has recently bred and Eurasian Spoonbill, which frequently appears in spring, often spends the summer. Other breeders include Water Rail, Northern Lapwing, Common Snipe and Common Redshank with Ringed Plover and Oystercatcher on the shingle. Sandwich Tern, Common Tern and Little Tern are usually present in the area in late spring and summer.

Nearby Salthouse Heath has a small breeding population of European Nightjar and also holds Woodcock, Tree Pipit and Nightingale.

Migrant passerines include all the commoner species such as chats, thrushes, warblers and flycatchers as well as regular Firecrest, Ring Ouzel and Black Redstart. Offshore in autumn skuas can be seen including annual Long-tailed Skua, in addition to Northern Gannet, Manx Shearwater and Leach's Storm Petrel. In late autumn Common Guillemot and Razorbill can be seen over the sea with small numbers of Little Auk and sea-ducks include Common Eider and Common Scoter.

Snow Bunting and Lapland Bunting, Horned Lark and Twite frequent the beaches from October and other wintering birds include Glaucous Gull and Iceland Gull, Short-eared Owl and Hen Harrier. Wintering waterfowl include large numbers of Dark-bellied Brent Goose and Eurasian Wigeon, Bewick's Swan and a few Whooper Swans. Grebes and divers, particularly Red-throated Diver, but also small numbers of Black-throated Diver and Great Northern Diver, can be seen on the sea.

The entire North Norfolk coast has become something of a Mecca for birders and the area is geared up for tourism, accommodation is plentiful in local villages.

Walsey Hills managed by the Norfolk Ornithologists Association (N.O.A), about 200m past the start of East Bank on the A149, is the site of the former Cley Bird Observatory (1949-1963) and an area still very attractive to passerine migrants.

The best birding area is situated between the villages of Cley-next-the-Sea and Salthouse to the east and between the A149 coast road and the sea.

From Cley village drive east for 2km to the car-park on the A149 and walk the East Bank north to the sea overlooking the marshes on either side. Arnold's Marsh, close to the beach, is particularly good. At the beach turn left and walk along the shingle bank towards the coastguard lookout.

Cley Marshes Reserve is owned by the Norfolk Naturalist's Trust and permits are required to use their hides although there are also public hides.

Permits may be available from the information centre at the eastern end of the village or in advance from Norfolk NT, Cathedral Close, Norwich NR1 4DF.

Search for photos of Cley in the gallery

The write up above says it all. I have had some great days here. I got my first close up view of a grey heron here, which made the trip worthwhile for me. The hides are well situated to give you optimal views of the birds. Would highly recommend. Pros

Scoters seen off shore (advised 517) Did not count myself, Snow Bunting, Shore Larks, Merlin, 4 Marsh Harriers, Spotted Redshank amongst numerous waders +a friendly bunch of other birders, well worth a visit. Pros