This Texas refuge, 10,528 acres in size, was established in 1972, to preserve the critically endangered Attwater's subspecies of the Greater Prairie Chicken and the coastal prairie habitat that it needs to survive. More than 250 species of birds have been seen here. The Attwater's Prairie Chicken Festival is held the second weekend of April every year (unless that is Easter, then it will be the first weekend).

This refuge is part of the Great Texas Coastal Birding Trail - site no. CTC 004. 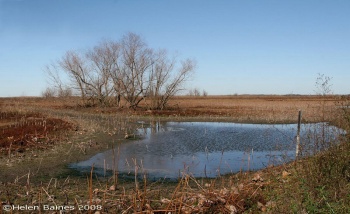 Photo by HelenB
Teal Marsh during drought conditions in Dec. 2008 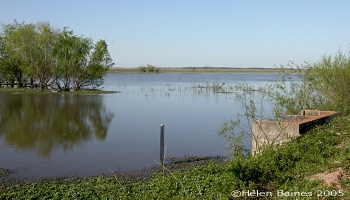 Photo by HelenB
Teal Marsh during wetter conditions in March 2005

The last few wild Attwater's Prairie Chickens (a subspecies of the Greater Prairie Chicken) are located in a part of the refuge which is not open to the general public, in order to protect them. There are less than 100 birds at three protected sites - the Attwater Prairie Chicken National Wildlife Refuge, the Texas City Prairie Preserve and private land near Goliad, Texas. There are captive breeding programs at the Houston Zoo, San Antonio Zoo and the Fossil Rim Wildlife Center, Glen Rose. 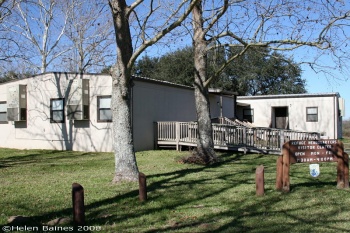 The refuge has about 50 species of mammals, most of which are nocturnal. Bobcats, coyotes and the nine-banded armadillos roam the refuge at night, while during the day you will see the re-introduced bison, plus 13-lined ground squirrel and black-tailed jackrabbit, if you are lucky. The refuge is also home to the American alligator, plus spiny softshell turtles, bullfrogs and upland chorus frogs. Don't forget there are venomous snakes there, too - Texas coral, western cottonmouth and southern copperhead snake. Butterflies and dragonflies are abundant in the Spring and Summer months.

The refuge was established in 1972, to protect, restore and maintain the native coastal prairie which is essential habitat for the Attwater's Prairie-Chickens. 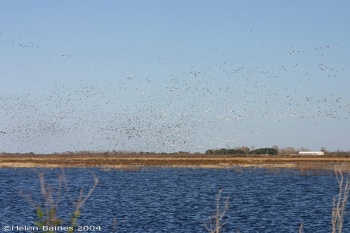 Directions
The refuge is located 6.5 miles northeast of Eagle Lake, off FM 3013. If traveling from Houston, take I10 west, then south from Sealy on Highway 36, and turn right onto FM 3013, and look for the Refuge entrance on the right. The HQ and Visitor Center are located 2 miles west of the main entrance on FM 3013.

Photo by HelenB
Sandhill Cranes wintering on the prairie, Dec. 2008. Click on image to see a larger version