Entrance
Photo by Dave B Smith

Fort Jefferson takes up most of the main island, Bush Key is where you will see the big colonies of breeding Sooty Tern, boobies, Brown Noddy and Black Noddy.

On the pilons you will see the usual suspects, pelicans, cormorants, gulls.

Magnificent Frigatebird glide above you. 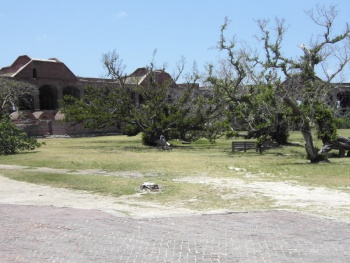 You can camp at the park, but bring your own EVERYTHING, there is no water in the park, no food either.

Getting there will cost you anywhere between $100 on a fastCat to 200 on a boat plain, unless you have your own boat.