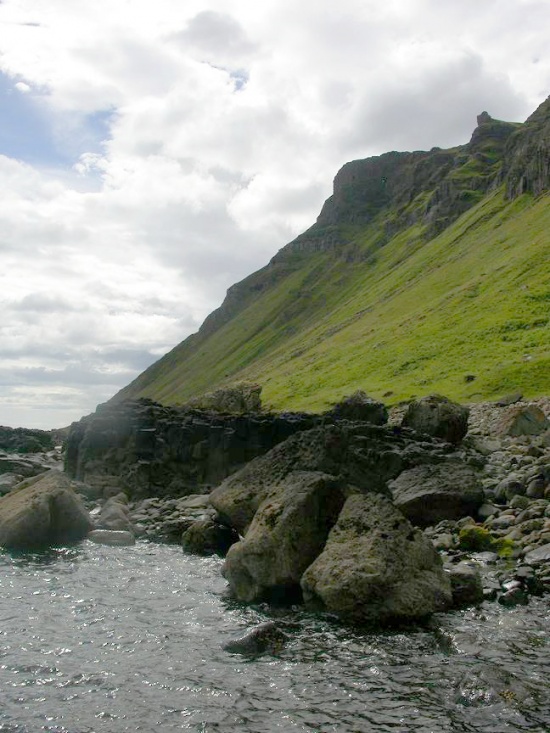 A large and irregularly shaped island off western Scotland, Mull has a range of habitats but this is generally upland country reaching more than 950m at the highest point, Ben More.

The island is almost cut in two by a sea-loch, Loch na Keal which indents the west coast, and further south there is another large sea-loch, Loch Scridain. In the south-west of the island is a long peninsula of low moorland with the small island of Iona off its tip.

The island of Ulva lies off the west coast as do the Treshnish Isles further offshore.

Much of this rugged island is good birding country but there are some particularly good spots that visitors should ensure they check.

Glen More is a long and steep-sided glen in the south of the island which is good for breeding passerines on the valley floor and raptors including Golden Eagle, Common Buzzard and Hen Harrier on the slopes. Take the A849 from Craignure towards Fionnphort which passes through the glen. Map

To the south of Craignure is the sea-loch of Lochdon, good for waders and waterfowl on passage and in winter. Red-breasted Merganser and Common Eider are present here all year and Hen Harrier and Common Buzzard hunt the surrounding moors and farmland. Map

Fionnphort lies at the end of the long south-western peninsula and from here there are ferries to the island of Iona. This island of hay meadows and moorland has sea-cliffs with breeding Northern Fulmar, Shag and Kittiwake. Corn Crake is just possible in the meadows here but more regular are Twite, Linnet and Yellowhammer. Map

Loch Scridain on the island's west coast is home to three species of diver in winter as well as various seaduck and a similar range of birds occurs in Loch na Keal to the north. Here the wintering divers are joined by Common Scoter, Razorbill and Black Guillemot. Slavonian Grebe is frequently seen on passage and both these lochs often hold divers in summer. Loch na keal has fishing terns and Northern Gannet in summer as well as various waders. Map

Offshore are the uninhabited Treshnish Isles with breeding Common Guillemot, Razorbill and Atlantic Puffin, Northern Fulmar, Shag and Kittiwake. The islands can be seen from boat-trips arranged at Ulva Ferry in Loch na Keal or Quinish to the north and these trips can produce skuas, shearwaters, European Storm-petrel and Northern Gannet during passage periods. Map

In the far north of the island close to the town of Tobermory are the Mishnish Lochs which have Red-throated Diver and Goosander in summer and sometimes Whooper Swan in winter. Golden Eagle, Common Buzzard and Hen Harrier are regular in this area. Map

There are regular car and passenger ferries to Craignure from Oban and to Fishnish from Lochaline. It may sometimes be possible to take the Coll and Tiree ferry and disembark at Tobermory in the north of Mull.

Accommodation is plentiful on Mull and cars, mopeds and cycles can be hired.

Search for photos of Isle of Mull in the gallery

Search for videos of Isle of Mull on BirdForum TV

Guided visits to a hide with views to the nest area of a Sea Eagle are available year round. Bookings via the Tourist Office at Craignure on 01680 812556 - booking essential. Bookings are made on a first come first served basis for up to 20 people per session.

Trips run Monday to Friday at 10.00 and 13.00. Cost is £5.00 for adults and £2.0 for children / concessions. Income raised by the Sea Eagle trips goes towards the project and good causes on Mull and Iona.

White Tailed and Golden Eagles are highlights. Lots of hooded crows. Well worth a visit. Pros