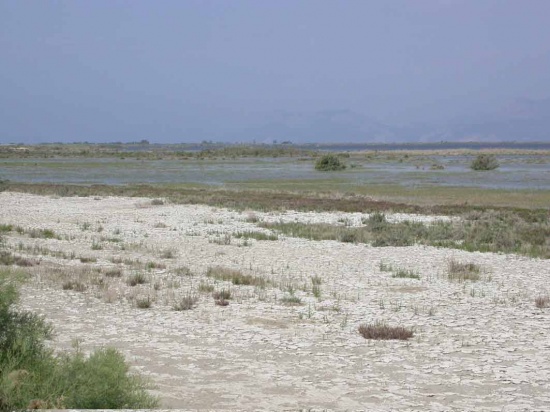 Photo by Wintibird
The Goksu Delta in May 2004.

Now a Specially Protected Area, this is one of the most important ornithological areas in the Western Palearctic region. Where the River Goksu enters the Mediterranean a large delta has developed and although much has been lost to agriculture the remainder hosts an outstanding collection of species.

In the north of the delta is the town of Silfke where the Goksu flows through a gorge with vultures and eagles usually present, possibly also Eurasian Eagle Owl. Other birds seen here and in the hills behind the delta are Yellow-vented Bulbul, Blue Rock Thrush, Upcher's Warbler and in winter, Wallcreeper. Woodland birds include Syrian Woodpecker, Krüper's Nuthatch and Short-toed Treecreeper. To the west of the rivermouth is the Paradeniz Lagoon, surrounded by bare sand-dunes and Salicornia steppe but retaining a connection to the sea and usually frequented by gulls, terns and waders. Further west is Akgol, a larger lagoon with lower salinity and fringed by dense and tall reedbeds which has better birds but can be difficult to view. The dunes here have Genistra scrub and provide cover for Black Francolin as well as attracting many migrants. Much of the remainder of the delta is cultivated and large areas to the north of the lakes and east of the river are now ricefields which attract large numbers of wetland birds and especially Cattle Egret a rare species in Turkey. South of the lakes is a large sand spit projecting into the Mediterranean.

Great White Pelican and Pygmy Cormorant may also breed but occur mainly on passage. Many other migrants occur including White Stork, crakes, Common Crane, marsh terns, gulls including Slender-billed Gull, and a great variety of waders, such as Marsh Sandpiper and Broad-billed Sandpiper. White-tailed Plover and Greater Sand Plover are both regular on passage and Lesser Sand Plover and Terek Sandpiper have also been recorded. Migrant and wintering raptors include Griffon Vulture, harriers and White-tailed Eagle, Greater Spotted Eagle and Eastern Imperial Eagle. Greater Flamingo is regular in winter and Lanner Falcon and Saker Falcon can turn up at any time of year. Rarities frequently appear in this area and in the past have included Yellow-billed Stork, Red-breasted Goose and Crab Plover, the first White-rumped Sandpiper for Turkey was recorded here while Cyprus Pied Wheatear may be regular in spring.

Over 330 bird species have been recorded in this area and these include some rather rare or local breeders such as Marbled Duck and Ferruginous Duck, Ruddy Shelduck, Black Francolin, Spur-winged Plover and Grey-headed Swamphen, which, in Turkey, breeds only here. White-breasted Kingfisher and Pied Kingfisher both occur in this area and raptors include Egyptian Vulture and Griffon Vulture and Lesser Kestrel. Various herons breed in the reedbeds of Akgol along with Glossy Ibis and Eurasian Spoonbill, Black-winged Stilt, Pied Avocet and Collared Pratincole. White-tailed Plover has bred.

Birds seen over the sea along this stretch of coast include Audouin's Gull, which is also regular off the pier at Tasucu, Mediterranean Shag, Cory's Shearwater and terns. Masked Shrike and Yellow-vented Bulbul can be seen in Tasucu village and Northern Raven in the surrounding hills.

This part of the Turkish coast, and particularly Dalyan just west of the river mouth, is well-known as a breeding site for Loggerhead Turtle and Green Turtle and there tracks may sometimes be seen on the sandy beaches.

This is a large and difficult area to work but the variety of excellent birds to be seen, especially during passage periods, makes the effort worthwhile.

Accommodation is plentiful in the ever-growing holiday village close to the delta, the port of Tasucu to the west has pensions and Silifke has hotel accommodation. Many birders tend to stay in Tasucu , touring the delta from here and there is an information office next to the ferry booking office where news of the latest sightings and maps of the area can be found. To visit the delta take the Silifke road out of Tasucu and after 2km turn right by a large paper factory and head towards the beach passing the holiday village of Denizkent. Continue to an old airstrip and on to the dunes with Akgol on your left. Carry on south-eastwards across the dunes to the sandy promontory or follow a track around the southern edge of Akgol leads to Paradeniz. To reach the ricefields to the north of Akgol take the track around the back of Denizkent. The delta area is reached on the E24 westwards from Adana where there is an international airport.