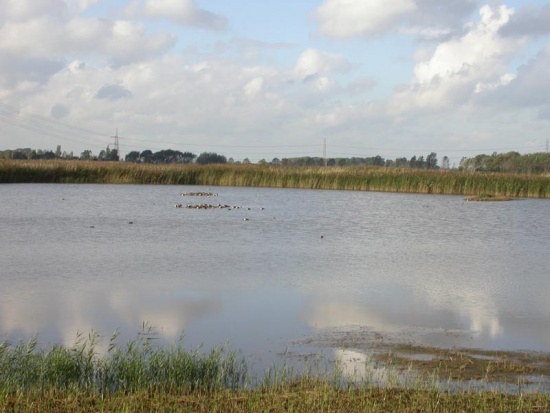 Photo © by Delia Todd
Blacktoft Sands Yorkshire looking from Marshland Hide over the reedbed and lagoon.

At the confluence of the Rivers Ouse and Trent, this reserve lies on the Inner Humber estuary and consists of extensive tidal reedbeds and saltmarsh with artificially created brackish lagoons.

The brackish reedswamp here is one of the largest remaining areas of this declining habitat in the country. Some rough grassland occurs and areas of willow scrub have been established to provide extra habitat, a recent acquisition has brought extra grazing marshes into the reserve.

More than 170 species are recorded annually at Blacktoft Sands. 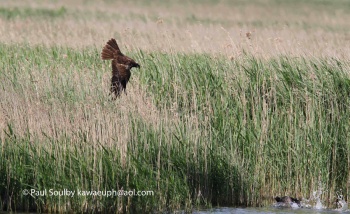 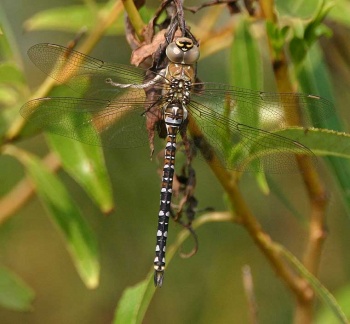 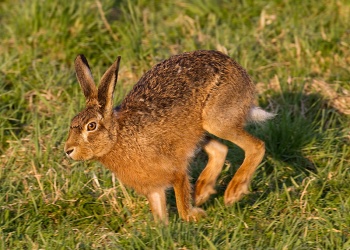 The reedbeds hold Little Grebe, Water Rail and Bearded Tit, Reed Bunting and warblers. There is a large Reed Warbler population, more than 300 pairs breed here, unusual numbers so far north. Occasionally Bittern attempt to breed on the reserve and are often seen in flight across the reedbed in late spring. Marsh Harrier are a constant sight with a large winter roost of upwards of fifteen birds. In summer several pairs breed.

The area is of national importance for waterfowl and a wide variety of waders occurs during passage periods. These include all the regular northern European species and scarcer birds such as Pied Avocet, Little Stint and Curlew Sandpiper.

Short-eared Owl, Hen Harrier and Merlin hunt over the area in winter and waterfowl occur in large numbers. Pink-footed Goose can often be seen on the Humber or overhead and other waterfowl present in autumn and winter include Eurasian Wigeon, Gadwall, Common Teal and Northern Shoveler, Common Pochard, Common Goldeneye and Goosander. Several other species, such as the more maritime Greater Scaup and Red-breasted Merganser, occur on occasion. Great Bittern is a scarce regular visitor, usually in winter.

Although this is about 60km from the sea each autumn and winter brings a few seabirds to Blacktoft Sands. Northern Fulmar and Northern Gannet, skuas, Kittiwake and auks have all been recorded. The five commoner gulls can all be seen in autumn, winter and spring, joined by the occasional Mediterranean Gull and Little Gull. Common Tern, Arctic Tern and Black Terns are regular in spring.

The cultivated fields around the village of Swinefleet are a reliable area for Eurasian Dotterel on spring passage. From the village keep right towards Eastoft and Crowle, rather than left for Blacktoft Sands, and search the pea-fields carefully. This is a regular site but the number of Dotterel present varies.

Two extremely rare waders in Britain have been recorded here, Hudsonian Godwit and Red-necked Stint and in March 2002 a Ross's Gull was present.

The land is owned by Associated British Ports and the RSPB have leased the site since 1973. The reserve is named for the sandbank in the River Ouse just to the North. Whilst the reserve does extend Eastwards to the River Trent there isn't public access further East than Singleton hide. Nowadays the reserve has a herd of konik ponies which are used to graze various areas to maintain the habitat as reedbed and wetland.

The reserve has six hides (mostly accessible to wheelchairs) overlooking the lagoons and reedbeds and can be reached from Goole heading west on the A161 to Swinefleet, then left towards Reedness and Ousefleet and the reserve car-park is 1km further on.

Bed and breakfast and self-catering accommodation on the edge of the Wolds within easy reach of Bempton Cliffs, Blacktoft Sands and Spurn Point.

Search for photos of Blacktoft Sands in the gallery

yorkshire83's review
Good reserve in a fairly accessible location. Offers good views of Marsh Harriers, Barn and Short-eared Owls, all of which you are more than likely going to see. Really good variety of species and a good chance to spot some rarer migrants too!!! Dotterel can also be picked up in the nearby villages in spring.

mikealison's review
I haven't been birding long, but had a great day here. This was the first time I have seen marsh harriers and I had an amazing view. Will be going again as there is to much to take in one visit

jenza88's review
I visited Blacktoft Sands for the first time yesterday hoping to see Bearded Tits and Avocets, both of which breed at the reserve. Unfortunately that avocets had departed a week or two previously but the birds that I did see more than made up for the avocet disappointment. The highlight of the day was the sighting of a Spotted Crake alongside a Water Rail - if only I'd had my camera! Despite warnings that the Bearded Tits were quite elusive I had an excellent view of several flying in and out of the reeds not too far from the most popular hide - Marshland. Other sightings included a Wood Sandpiper, green and common sandpipers, many Redshanks, numerous Ruffs, a Marsh Harrier, two Black tailed Godwits, 5 snipe, numerous teal and lapwings. All in all it was a very successful visit and I shall definitely be returning.
The reserve has 5 hides which are spread along a straight path with several hundred metres between each one. The most popular hide is Marshland which can get quite busy and is situated approximately 400m from the reception hide. There are no cafe or food facilities there.

gbh1812's review
I have graded this as a 6 and taking into account the fact that the majority of England has been fog bound for the last 2 days you will understand why.

My friend and I had planned 2 days birding around Blacktoft and boy were we gutted with the weather! However, we had booked two nights at the Reeds Hotel (Best Western) at Barton on Humber and after a hazardous drive through the fog we were not disappointed!!

The hotel has the Humber Estuary on one side and several lakes on the other. We woke up each morning to a pair of GC Grebes, Goldeneyes, Marsh Harriers, Long Tailed tits to name but a few! How happy were we.

Great walks around the Far-Ings Nature Reserve - hotel is on doorstep.

Also good for Bullfinch and we are currently arguing over whether we saw a Blackcap/Stonechat! Going back in the Spring.

A fab place for birders. If your partner is NOT a birder then leave them at The Reeds Hotel - it has its own Spa Complex attached so they will be well occupied!

deatheagle's review
I went to Blacktoft at the weekend. It was a fantastic place. I saw some amazing birds such as a Marsh Harrier hunting over the reeds, Shoveler, Wigeon, Golden Plover, Lapwing, Goldeneye, Gadwalls and a Whooper Swan.

barry stone's review
Visited April 07. Up to 100 Black-tailed Godwits, a large number of Avocets, Marsh Harriers over the reed beds most of the day and a Barn Owl flew within 20 yds of the hide.
Great venue