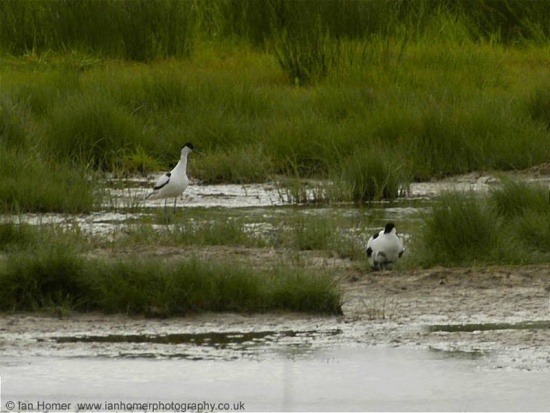 Photo by led_snapper
Avocets with Chicks at Newport Wetlands, Wales

This new wildlife reserve, opened in March 2000, on part of the tranquil Gwent Levels on the edge of the City of Newport. It was created as mitigation for the loss of mudflats of Cardiff Bay.

The new reedbeds, saline lagoons and wet grasslands have already attracted a wealth of wetland birds including internationally important number of overwintering Shoveler and Pintail with numbers of Wigeon and Teal rapidly approaching the same level of importance. Other wintering wildfowl include Gadwall, Pochard and Goldeneye, with the occasional Scaup.

Bittern may be seen at the Uskmouth Reedbeds in winter along with Hen Harrier and Short-eared Owl. Up to 50,000 Starling use the reedbeds to roost in winter.

The scrub around the reedbeds has Cetti's Warbler which are resident all year, a recent survey revealed around 70 singing males! Also Reed Warbler and Sedge Warbler in summer along with a few Grasshopper Warbler in the reedbeds through the summer. A good number of Lesser Whitethroat are found around the hedgerows during the summer and are joined passage Redstart, Whinchat and Flycatchers during the spring an autumn.

Lapwing, Redshank, Oystercatcher, Little Ringed Plover and Ringed Plover breed on the wet grassland and lagoons. Avocet bred here, for the first time in Wales, in 2003 with the colony getting larger every year. Little Egret are resident all year and are breeding near the reserve. Hopefully in the coming years Bittern and Marsh Harrier will join the vast list of breeding birds, with the latter being seen regularly through migration times with some staying for a few weeks. In winter 2008-09, a juvenile Marsh Harrier wintered on the reserve, this is Gwent's first wintering Marsh Harrier.

Also the vast reedbeeds are recognised as nationally important for Aquatic Warbler on migration and the surrounding scrub has had Yellow-browed Warbler, Firecrest, Barred Warbler and most recently a Subalpine Warbler. 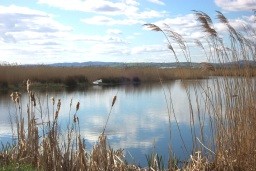 The Reserve is also an excellent place to see other wildlife, such as orchids, butterflies, dragonflies, Otter and Water Shrew. A Walk around the reserve in mid summer should produce numerous Clouded Yellow and Scarlet Tigers and even the Cream Spot Tiger. Moth trapping events are sometimed run during the summer and will get up close and personal with species such as Elephant Hawkmoths and some wetland speciallities.

The reserve was formally ash lagoons for the nearby steelworks and farmland. The ash lagoons are now the reedbeds and the farmland now the goldcliff pools and wet grassland area which support a range of breeding and wintering waders and wildfowl. The new RSPB centre which opened in March 2008 now has thousands of school children visit each year to learn about the wildlife around newport.

The Goldcliff lagoons [Map]are where you'll find a vast majority of waders. High tide is by far the best but alot of wader species are present throughout the day.

The area alongside boat lane is particularly good in winter for the large numbers of lapwing and wigeon. Almost 3000 lapwing were present in this area last winter! Boat lane is also worth a look if Marsh harriers have been reported. Uskmouth reedbeds are the other favoured site for Marsh harrier along with Hen Harrier in the winter.

The star bird of the reedbeds at the reserve are the Bearded Tits. They tend to favour the reeds east of the lighthouse along the seawall, but they do move around.

The scrub along the seawall is also good, especially in the spring when migrants are returning. Check for Grasshopper Warbler in the brambles and along the rocks for Northern Wheatears.

Access is very easy with surfaced paths around the reedbed and grasslands. Goldcliff is a little uneven with just natural paths through the grass. The reserve has numerous viewing screens looking over the pools at Uskmouth and the saline lagoons at Goldcliff.

A large Visitor centre was opened in March 2008 which is run by the RSPB. There's a shop, including a good book shelf, and a cafe looking over a new scrape and wet grassland area.

luke's review great place to go birding, plenty about most times of year, great in winter with loads of wintering ducks and wader, reasently went there on the BF bash, we had 63 species in a day ranging from avocet to wren, good day out Pros

luke's review A three Million pounds visitor centre is currently being constructed at the reserve entrance. its due to be open by next autumn. (2007)