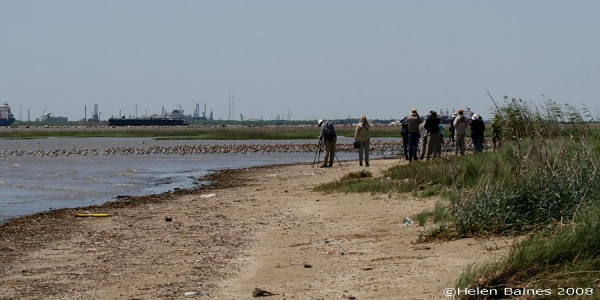 Located on the Upper Texas coast, northeast of Galveston, the Bolivar Peninsula is essentially a washover bar separating Galveston Bay to the north, from the Gulf of Mexico to the south. At the southern end is the Bolivar Flats Shorebird Sanctuary, 1,146 acres consisting of coastal beach with mudflats and this is the prime birding spot on the peninsula. The beach was extensively damaged by Hurricane Ike in Sept. 2008, but is recovering well. Other nearby spots on the tip of Bolivar Peninsula (all west of Retillon Rd) are also birdy, including French Town Road, Fort Travis Seashore park, ferry landing at tip of peninsula. Horseshoe Marsh and Munday Marsh Bird Sanctuaries are also nearby. 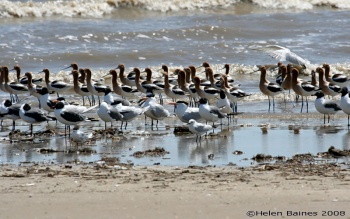 Photo by HelenB
Birds on the shore at Bolivar Flats Shorebird Sanctuary, April 2008. Click on image for larger photo

Long species lists are turned up here each month. For example 100 species were seen in 4 of the last 12 months. Minimum number of species was 73. Each monthly count was only over a 3 hour period in a relatively small area by less than 10 participants.

American Avocets, Piping Plovers, Snowy Plovers and many other shorebirds. Other visitors include Black Terns, scoters and jaegers. 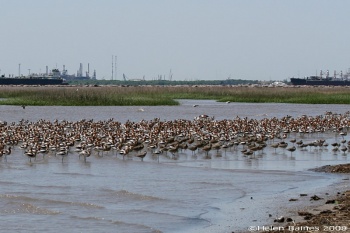 In 1816 the Bolivar Peninsula was named for Simon Bolivar (1783-1830), the Venezuelan military and political leader.

The Bolivar Flats Shorebird Sanctuary was first established in the late 1980's, with the permission of Galveston County. The beach was closed to vehicles with the building of a vehicular barrier. Over the years more land was acquired and the sanctuary is now 1,146 acres in size. The Western Hemisphere Shorebird Reserve Network recognizes it as a site of hemispheric importance, and National Audubon Society and Birdlife International, as an Important Bird Area.

You can drive right up to the ocean's edge on the flats themselves but take care not to get stuck in the mud.

Search for photos of Bolivar Peninsula in the gallery

bernerjc's review top spot on the Upper Texas Coast for shorebirds. free. Only downside is hard to get to from Galveston /Houston. Must take car ferry which is fast in winter but requires long waits in the spring/summer during middle of day