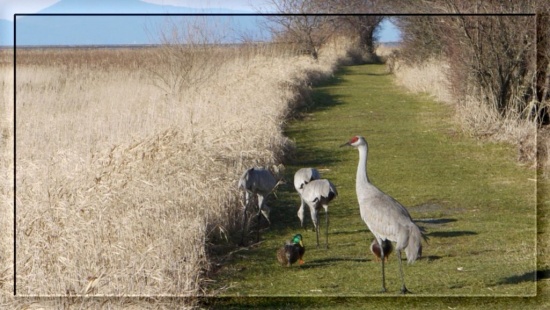 Located in the heart of the Fraser River estuary on Westham Island. Winter home of the Lesser Snow Goose. 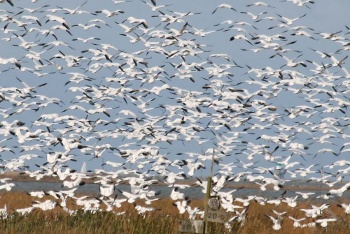 When George C. Reifel bought his property in 1927, it consisted of land isolated from the rest of Westham Island by Ewen, Robertson and Fuller Sloughs, natural river channels which dissected the island. Although all equipment and building materials needed to be barged in, by 1929, he had consolidated more land, and created a large recreational family retreat in this idyllic location. Dykes and causeways were constructed to create waterfowl habitats and road access connecting his land ("Reifel Island") to the rest of Westham Island. Although the family ran successful real estate and brewery businesses, Reifel Farm, as it became known, was also very successful, and during WW2 was responsible for over one-third of the sugar beet seed production of Canada.

In the 1960's, his son, George H. Reifel, granted the first lease to the British Columbia Waterfowl Society for a Bird Sanctuary to be named after his late father. Ducks Unlimited Canada was brought in to assist with the water management of the many wetland habitats on the site, and has continued to be an active partner in the management of the area. The provincial government supplemented this effort by establishing a game reserve on the adjacent intertidal foreshore.

By the turn of the century, protective dykes had been built along the Fraser River to protect Ladner's thriving farming and fishing-based community from the Fraser River and the tidal waters of the Strait of Georgia. Nearby river islands were only partially dyked or left to flood each year naturally, and were often sites of fishing camps which supplied the numerous local salmon canneries. On Westham Island, Ewen Slough was the site of one of these camps, named after Alexander Ewen, a scotsman who owned several local canneries. 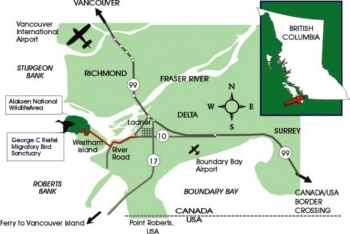 The Sanctuary is located on the outskirts of the Village of Ladner, in Delta, BC.

Search for photos of George C. Reifel Migratory Bird Sanctuary(Delta) in the gallery