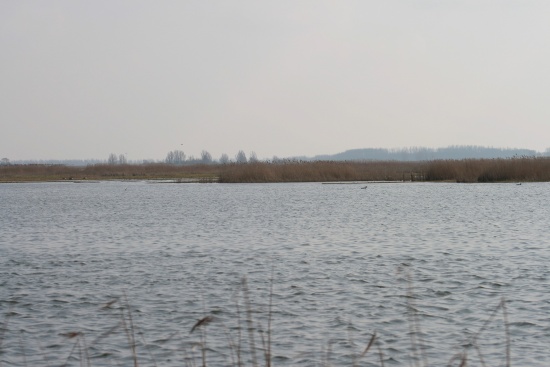 The Lauwersmeer is a man-made lake, located in the north of Holland, on the border between the provinces of Groningen and Friesland. It is a freshwater lake and the area became a National Park 2003. In the winter it is home to huge numbers of geese and swans.

The Lauwersmeer area is of particular interest in migration and in winter for its number and variety of geese. Lesser White-fronted Goose (of the recently established still small western population)are regular in migration west of the Lauwersmeer, mainly in the area south of Anjum. Snow Goose and other rarities can be observed at times all around the Lauwersmeer.

[1]Birds you can see here include:

[2][3] The Lauwersmeer was created after the Lauwerssea was closed up in 1969 and 6.000 ha of the 9.000 ha was designated for nature and recreation purposes. The Staatsbosbeheer (State forest control, a Dutch organization founded in 1899 to control and conserve Dutch nature reserves) owns about 5.000 ha of this. Over the last two decades the Lauwersmeer has developed to a wetland of international importance for wildlife.

[2] De Pomp This route leads through reed beds and some open areas, which is why you can observe reed species such as Savi's Warbler, Great Bittern and Penduline Tit here. In 1997 both Black-crowned Night Heron and Little Bittern bred here succesfully. Rarities that have been seen here include Woodchat Shrike and Common Crane

Photo by Fast_Falkon
The bird hide in the Ezumakeeg area.

This site is well known among Dutch birders for the numerous rarities that have been observed here since the site was created in 1997. There is an observation hut in the southern part and a observation screen in the northern part, from wich species such as Pied Avocet, Great Bittern, Ruff, Spotted Redshank, Bearded Tit and serveral other wader and duck species can be seen. Rarities that have been observed here include White-tailed Lapwing, Lesser Yellowlegs, Pacific Golden Plover, Long-billed Dowitcher, Sharp-tailed Sandpiper and a pair of Black-winged Stilt which raised 4 young in 1999.

Red-neck puddle This puddle was named after the Red-necked Stint that was observed here in 1987. Its a small puddle with reed beds in which reed species can be seen. Also wader species forage on the banks. Species that can be seen here include Spotted Crake, Jack Snipe and Great Bittern.

Jaap Deensgat The water here is not very deep, so many species of birds come to rest and forage here. Many wader species and Spoonbills can be seen here. Other species that have been seen here include Peregrine Falcon, White-tailed Eagle, Gull-billed Tern, Whiskered Tern, White-winged Black Tern and Great White Egret.

Lauwersmeer is about half way between Leeuwarden and Groningen where there are a number of hotels. The area can be reached on secondary roads going north towards the Wadden Sea coast.